If you want to revitalize the old films you have laying around into digital videos or photos, then you need to get your hands on an appropriate tool.

The appropriate tool for such task is a dedicated 8mm film scanner.

You can not only preserve your precious films forever in digital form, but they can be better shared and enjoyed too.

You can store them to any cloud service and can share them with your friends on social media.

In this article, we will help you uncover some of the best 8mm film scanners that suit your budget as well as your needs.

What is an 8mm Film Scanner?

Long before the digital cameras. 8mm or super 8mm films were used to record some special moments.

These films were used to record home videos to save the precious memories that would give a hint of how life used to be years back in the 1930s.

The standard for 8mm and super 8 films was launched in 1965. There used to be dedicated super 8 cameras for recording videos on to spools of films.

It is hard to imagine in this time and age where you have gigabytes of storage in a mere mini card. But using bulky, small capacity reels for recording videos was the cutting edge technology of the time for an average consumer.

An 8mm Film Scanner is basically a device that can take the ANALOGUE negative films and then turn them into DIGITAL photos or videos.

They do this using a powerful camera that scan each and every frame and then save it to an inserted SD card in sequence.

Related: How To Scan Negatives Using A Flatbed Scanner

Not all scanners are capable of scanning the 8mm films. Therefore, we have selected some of the best scanners for scanning 8mm films. 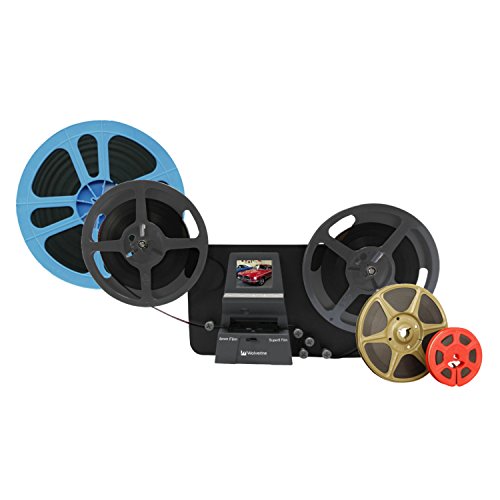 This is one of the most expensive as well as the most robust 8mm film to video scanner out there.

This is basically a standalone machine so you don’t need to have it connected to a computer. It basically has a camera that repeatedly captures the negative films and then translates that into a video.

You can directly save your videos in to an inserted SD card. The max supported SD card is 32 GB therefore, you can store plenty of scanned videos at a time.

The scanner converts the videos at 1080P resolution, 20 frames per second to mjpeg-4 or (MP4) format which is supported by almost all devices. Plus it can easily be converted into other digital formats like avi pretty easily.

The scanner harbors a 3.53 megapixels camera with CMOS sensor for capturing the scans into high quality. Another feature that separates this from the rest of the 8mm films scanners is that it can support large reels up to 9″ in diameter.

Basically, this scanner has been marketed as one of the best 8mm film scanners out there. So far, the majority of the users do think so. It looks sleek, it is easy to use, comes with a 2.4 Inch LCD for previewing your videos and has all the convenient features to make your job easier. 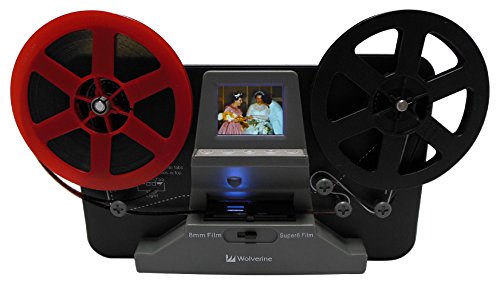 This is the cheaper version of the Wolverine MovieMaker-PRO we saw above.

There are few notable differences between this and the Pro version. For starters, it does NOT support 9″ reels. Instead it can support a maximum of 5″ 8mm and super 8 film reels.

Besides that, unlike the Pro version which can digitize the films at 1080 or FHD quality, this can only convert to HD or 720p video quality. Therefore, if you want higher quality video, the Pro version above is the better choice.

Other than that, it offers the same functionality including standalone scanning that does not require connecting it to a desktop. You can directly transfer your scanned videos to an SD card (32 GB Max).

It also offers a 2.4″ LCD for previewing your films as they are scanned.

All in all, while this has a lower video quality output, the fact that it is cheaper than the Wolverine MovieMaker-PRO makes it one of the best 8mm film scanners for those on a tight budget.

While it only supports 5″ reels like the vanilla Wolverine MovieMaker, it can convert the films into 1080P FHD videos like the Pro version.

Besides that it is more or less the same as the two above. It is a standalone device with a maximum support for 32 GB SD Card. Furthermore, It has a 2.4″ LCD screen for previewing the films as they are scanned.

As far as the price is concerned, it costs almost as the much as the Wolverine MovieMaker (the vanilla version).

While on paper it certainly performs better than the original Wolverine MovieMaker, there is one small caveat with this.

Cotsok is a not a very famous brand. Unlike Wolverine, which is an established brand in negative film scanners, Cotsok is barely existent.

On top of that, the Wolverine scanners have been in the market for a long time and have garnered plenty of reviews. The same cannot be said about this product.

However, so far, the few customer reviews that it has received and the specs that it features, certainly does make this as one of the best 8mm films scanners in the market. 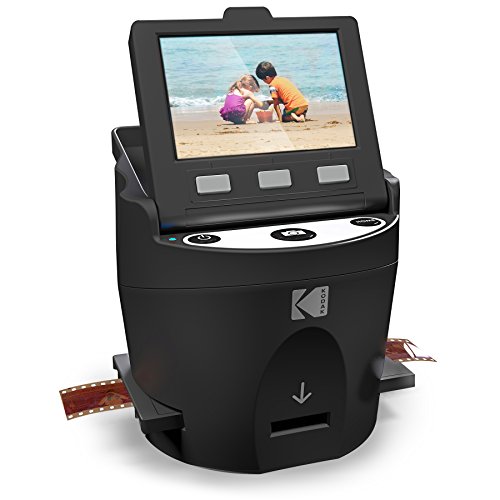 Note that this is a photo slide scanner. Meaning it can scan a variety of negative slides and transfer them into JPEG Still Photos.

Therefore, if you came here looking for a product to turn your 8mm negative films into photos, then this is something that will interest you.

It is cheaper than the video scanners we saw above and as far as the reviews go, it is one of the top products of its kind.

The scanner offers a comfortably large 3.5″ LCD screen for previewing your negative films and supports SD card upto 128 GB in size. You can directly transfer to SD card so there is no need for connecting this device to a computer.

It also comes with goodies such as film adapter for accommodating various film sizes as well as a cleaning brush for removing the dust and speckles from the films.

All in all, if you want a robust choice for converting to photos, then this is one of the best 8mm film scanners. 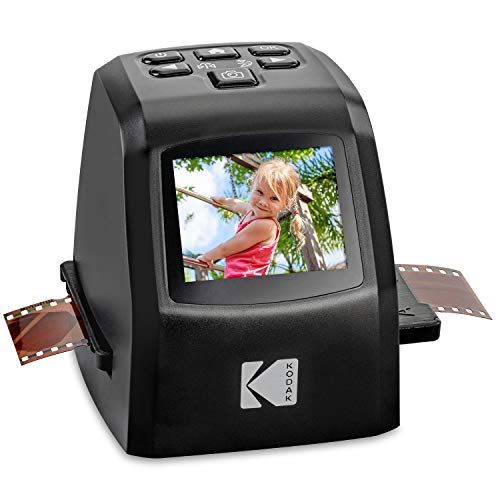 This is another 8mm films and super 8 films to JPEG scanner like the Kodak Scanza above. It is smaller in size, has a smaller 2.4″ preview LCD screen but costs much cheaper than the Scanza.

Furthermore unlike the Kodak Scanza, it can only support a maximum of 32 GB SD card not 128 GB. It also lacks slide inserts and adapter trays for safely loading the films.

However, its cheaper price makes this a justifiable purchase.

It is also a standalone device that does not require connectivity to a computer for operation.

If you are looking for an affordable solution to convert your films to photo stills, then this is one of the best 8mm films scanners.

What are the Types of 8mm films?

8mm films can be found in different types.

Released before World War 1, the measure refers to the width of the film strip.

These are effectively called the 16 mm films.

Launched in 1965, super 8 film is an upgraded and superior version of 8mm films.

These are a different version of super 8 films. Introduced by the Fuji; it is contained within a different cassette.

Do 8mm films have sound?

If you have old 8mm films, then chances of them having sound are very slim. Still, you can check the magnetic strip and see if it has gold or copper along the same side as sprocket holes. It has the chances of having sound with these gold and copper strip holes.

What file formats are good for digitizing with 8mm film scanner?

You can choose any file formats like motion JPEG, MP4, Avi, MOV. MP4 is good for web sharing, especially if you want to share your film with your friends and family.

How to Clean your 8mm film before converting it?

Cleaning your 8mm film before scanning is important. It may have gathered dust with time. It can be dry, curled up, with dust particles.

These scratches and dust particles can impair the quality of your video.

For cleaning, take a silicon cloth and fold it like a pad. Clean both sides of the film with the padded cloth. Be careful or you You may break any part if it is folded or brittle.

In this article we had a look at the some of the best 8mm film scanners in the market.

Whereas the photo scanners like the Kodak Scanza convert the 8mm films into still photos.

In the end, the one suitable for you depends on your needs and preference.