The weight of a laptop is often a crucial factor in deciding what laptop to buy. While all laptops are portable, their actual size and weight still dictate how handy they can be. However, most people equate portability to lower specs since smaller laptops don’t have enough room to house powerful specs. But this isn’t usually the case.

In this article, we will discuss how much does a laptop weigh, along with its different categories, popular brands, and weight ranges.

Understanding Laptop Categories (How Much Do They Weigh?)

Laptops’ standard weight usually ranges from 2 lbs up to 8 lbs, with some brands that can go lower or higher than this. These devices typically differ in size because of the different hardware components that come with them.

For example, more powerful laptops often include more fans. Screen sizes also play an integral part in the overall weight of the device. These parts contribute to the overall weight of a laptop category, and understanding these categories will help you find the best laptop for you. To help you out, we have listed the most popular laptop categories in the market today.

These laptops weigh between 2.5 lbs to 6 lbs and are made to be thin and portable.

While they aren’t as lightweight as the MacBook Air line, they’re still more portable than other laptop categories such as gaming laptops and other business laptops. 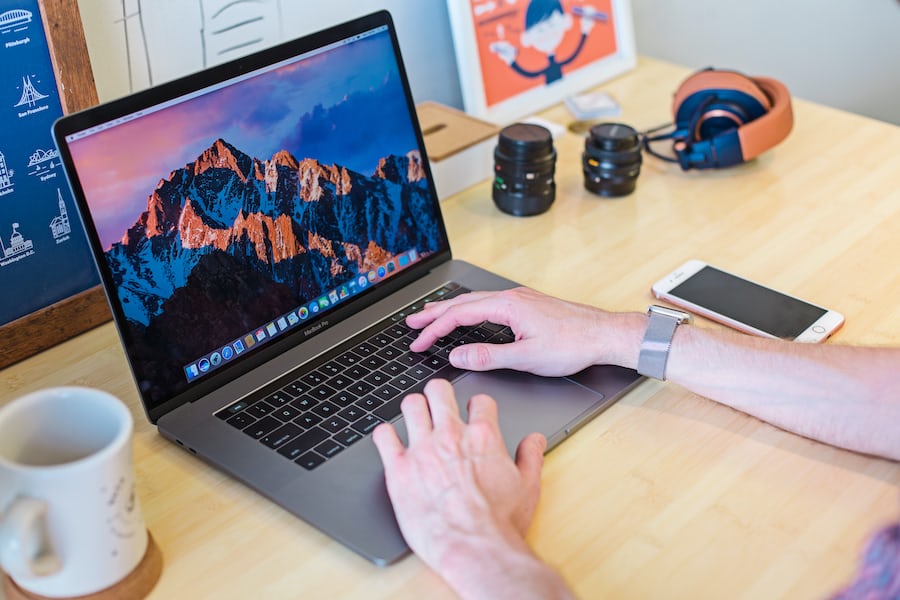 They might be thin and light, but these laptops often have powerful specs. This is why they are the go-to devices of designers, developers, or anyone who requires a laptop with a good display that can run heavy programs.

This specific model of laptops is the thinnest and lightest you can find from Apple. As its name implies, MacBook Air aims to be as light as the wind. While this is obviously hard to achieve, the company could still produce one of the lightest laptops in the market, weighing only 2.8 lbs with an 11-inch display.

But don’t be fooled with its weight; MacBook Air still produces powerful performance compared to other laptops. This is why they come with a hefty price tag and are one of the most expensive devices in the market. But you get value for your money, so most people still look past its costly price.

These types of laptops are heavier and weigh around 4 lbs or more. They are built with gaming in mind, so the specs are often more powerful compared to traditional laptops. For example, they usually feature a bigger battery and extra fan to help prevent overheating when gaming continuously.

In addition, they also house better graphics cards and processors so that they can run titles that require better GPU and CPU. Their designs are often bulky, so if you need a portable and easy to bring laptop, this may not be an ideal option.

Chromebooks and Ultrabooks are also lightweight and portable like MacBooks. They often have a different operating system than many traditional laptops, with ChromeOS and Windows 10 S or just Windows 10 on Ultrabooks.

These laptops weigh between 2 to 3 pounds and are famous for many casual computer users or those that don’t require much computing power in their daily tasks. Often, students and businesses use this type of laptop because of its low prices. 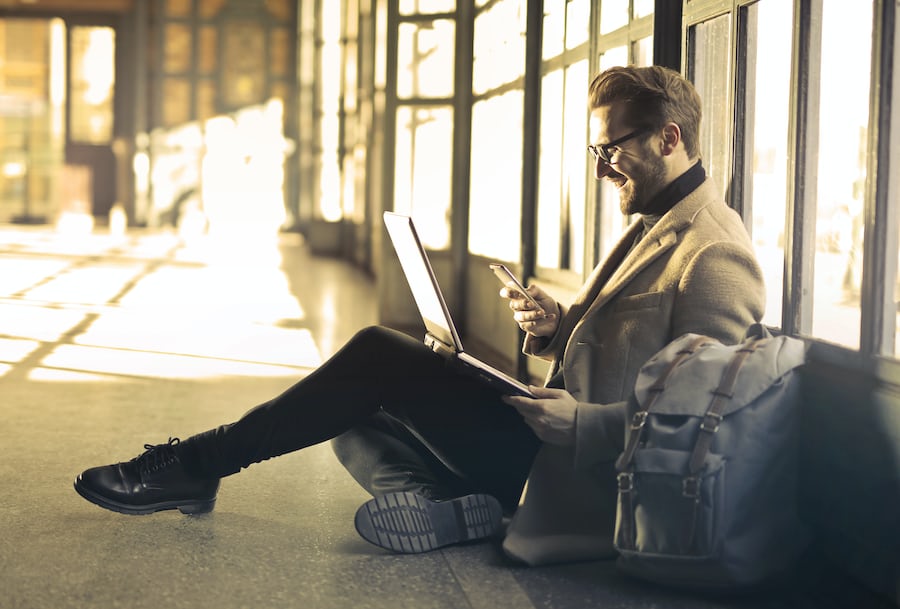 Business laptops weigh from 1.9 lbs to 5 lbs, depending on the brand and model you choose.

They often have mid-range specs that allow users to run several apps that require a good amount of computing power.

They can also run heavy programs in moderation (as they aren't built specifically for them).

Business and work laptops are often designed with portability in mind, primarily since many business people work in a hybrid type of environment. This requires them to bring their laptop at home and to the office.

There is no specific distinction between school laptops and traditional laptops. However, devices that fall under this category tend to be more portable and lightweight than other types of computers.

School laptops often weigh around 2 lbs to 4 lbs and feature some low to mid-range specs that can handle simple tasks such as research and occasional heavy apps. Furthermore, they are often more affordable than most laptops because they're targeted to students who usually can’t afford expensive, powerful laptops.

*Note that our ranges are based on several models, but exceptions/newly released models can occasionally be found that fall outside our findings.

How Much Do Gaming Laptops Weigh?

Gaming laptops are packed with features that allow users to continuously use the device without experiencing any interruption to their experience. Because of this, they weigh much more than traditional laptops, which are usually around 4 lbs or more.

While their GPUs are more powerful than traditional ones, they aren’t the main reason they weigh much. Laptop graphics cards are slimmer than normal ones and are made specifically for laptops.

At the same time, their CPUs are more powerful, but they also don’t contribute much to their weight. There are many reasons why a gaming laptop is heavy, but the primary reason is its cooling system.

These devices often have a better cooling system to prevent the machines from overheating. Since they have powerful components such as  CPU, GPU, RAM, and PSU, they require more power to run, producing so much heat. Because of this, gaming laptops need to have more space for the heatsink, bigger fans, and airflow so they can fit in the required cooling system.

In addition, top quality gaming laptops have better screens to show the maximum output of their powerful GPU. This can impact the overall weight of the laptop. At the same time, it uses a better and bigger battery to allow users to play their games as long as possible.

With all the powerful specs they house, these laptops need electricity to support all of them. This adds a substantial increase in its weight.

Lastly, gaming laptops often have many ports to support accessories that can better the gaming experience. This also increases the overall weight of the laptop. 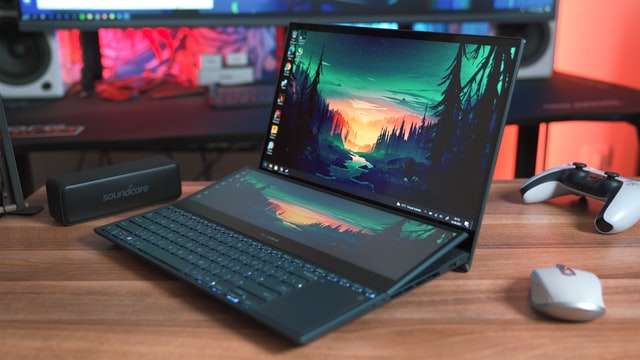 How Much Should A Laptop Weigh?

A laptop’s weight directly impacts its portability. At the same time, what you need your laptop for will affect the level of portability you need. If you travel a lot and need to bring your computer everywhere you go, a lightweight device is something that you should look for. Even if a smaller laptop lacks the functionality of a larger device, its portability outweighs its specs.

To further understand how much a laptop should weigh, here are some pointers you should know about:

If you’re a student, you need a laptop that can be carried easily. This allows you to study and work anywhere you’d like. If you don’t require a lot of computing power, an Ultrabook or a Chromebook can be your best option.

This type of laptop allows you to do simple tasks like word processing and research. They also weigh lighter than most laptops, so portability isn’t in question. Lastly, they are affordable, so they won’t break your bank.

As a professional, the weight of the laptop shouldn't just be the factor you consider when purchasing one. You also need to consider its functionality. For example, are you a developer who requires computing power in their line of work?

If so, an ultraportable laptop may not be a good option because they don’t usually have the functionality you’ll need. However, Macbooks can be a great option as they offer both functionality and portability.

You also should note that the weight of the laptop isn't the only thing you should consider with portability. Its accessories like chargers and other external parts also contribute to its overall weight.

If you edit videos and photos for work, you need a laptop with better specs and functionality. Running editing programs requires a lot of processing power. At the same time, it also runs powerful GPUs to provide you with the best display so you can properly do your work.

Powerful processors and graphics cards require a lot of electricity and popper ventilation, so laptops with these components are often bulkier and heavier. You should expect a laptop for this line of work to not be as portable as laptops should be. 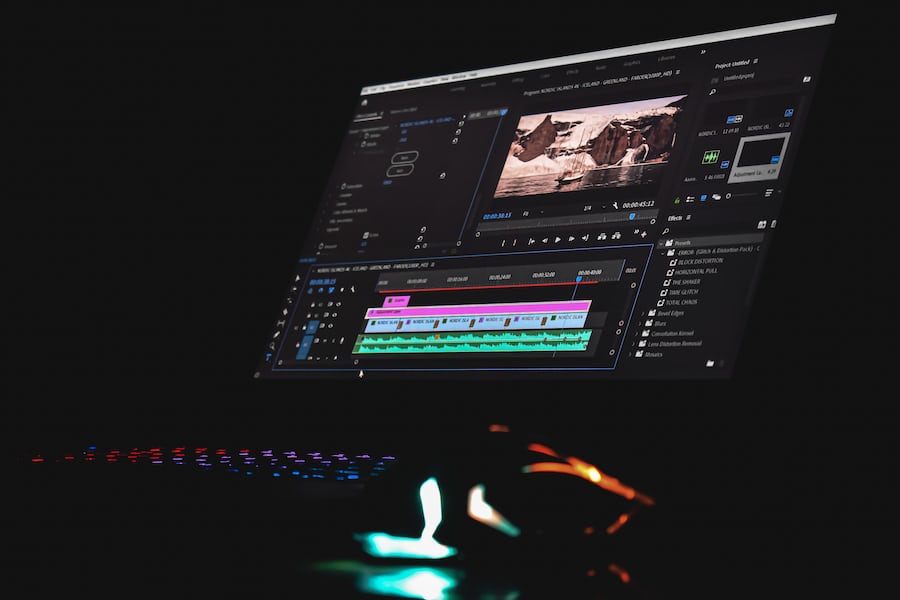 Dell is one of the leading manufacturers of laptops in the world. Most of its models fall under 3 lbs, making this brand truly portable. The 3 lbs range includes some of Dell’s finest high-end laptops like the Dell XPS 13 9370 and even its least powerful casual run-of-the-mill laptops (Dell Inspiron 11 3000 2015).

Alienware is Dell’s gaming laptop line. This brand offers one of the most powerful laptops in the market, so it’s no surprise that it isn’t as light as Dell’s traditional laptop line. Alienware laptops’ weight ranges from 4 lbs and can go as high as 8 lbs, depending on the configuration ordered and the manufacturing ability.

HP manufactures almost all types of laptops ranging from Chromebooks, Ultrabooks, traditional mid-range laptops to gaming devices. That's why HP's laptops weigh from as light as 1.9 lbs to 8 lbs depending on the type of laptop you’ll get.

Surface is Microsoft’s own laptop line. This brand aims to provide one of the lightest laptops in the world. Most of the devices they offer come with a detachable keyboard, allowing you to use your computer as a tablet. Surface laptops weigh from 2.8 lbs to 3.4 lbs.

Toshiba is famous for producing mid-range laptops. So, it's no surprise that the average weight of this brand falls under the standard laptop weight. Toshiba laptops weigh from 3 lbs to 8 lbs, including its Satellite line.

What makes a laptop heavy?

The components of the laptops, such as the battery, cooling system, speakers, keyboard, screens, and others, contribute to the overall weight of a laptop.

How much does a laptop battery weigh?

Depending on the battery cell, its weight can go from 0.6 lbs to up to 3 lbs.

How much does a laptop charger weigh?

A laptop charger, particularly the brick charger, weighs around 1 to 2 lbs.

How much does a laptop hard drive weigh?

How can I find the weight of my current laptop?

There are two ways to find the exact weight of your laptop. First, Google the model and brand of your laptop to check its weight. Or, weigh it yourself.

Laptops have evolved over the years. Historically, we only have limited options for this device, and often, they don’t have it in our preferred weight. Now, you can choose one depending on its portability and its functionality. In the future, we can expect more innovations in the laptop industry that can benefit our daily lives.