There many different categories for computers. When we talk about home use specifically, we are looking at the the category of computers that is rather affordable, has a weaker hardware, and can operate low key tasks comfortably.

Thus, in this article we will only look at the best desktop computers for home use. We will not be going over professional or gaming desktops since they belong to a different category and class.

In case if you want to check out other desktops read:

Desktop Computers for Home Use Compared

What to Expect Here?

As such, the hardware that you would expect on these machines is only entry level.

Since the class/category of a computer is often judged by the processor that is possess, you should not be surprised if these desktops boast the Intel Celeron Processors.

For those of you who are not aware, Intel Celeron processors are among the weakest processors.

Don’t fret though, because for low key tasks, you will have absolutely no issue.

Besides that, in our opinion, the most powerful processor that you should aim for in this category is an Intel Core i3.

Intel Core i3 is a highly capable processor not just for basic use, but even for casual editing as well as light gaming.

Of course, the performance of the Core i3 will depend a lot upon the model you get (i.e Intel Core i3-8130U is far far weaker than the Intel Core i3-9100)

To summarize, in this category of best desktop computers for home use, we will only be looking at options that feature processors within the Intel Celeron and Intel Core i3 range (or AMD equivalent).

Anything beyond this range i.e Core i5 etc, would be too powerful for home use. We do not want you spend more on something that you would not use to its maximum potential.

What About The Rest of the Specs?

As far as the RAM goes, you can expect to find anywhere between 4 – 8 GB of RAM. 4 GB is sufficient for light to moderate use, whereas, 8 GB is sufficient not just for heavy multitasking but also for casual editing/rendering.

Besides that, you can find both HDD as well as SSD hard drives in select models. Of course, we would always recommend going for SSD whenever possible.

Finally, you can find two types of desktops:

Standalone generally feature a better hardware at a cheaper price tag. But they are bulky and do not come with a monitor.

All in One are a complete package. They boast a screen, webcam and even built in speakers.

We have selected the following desktops computers as the best in this category. 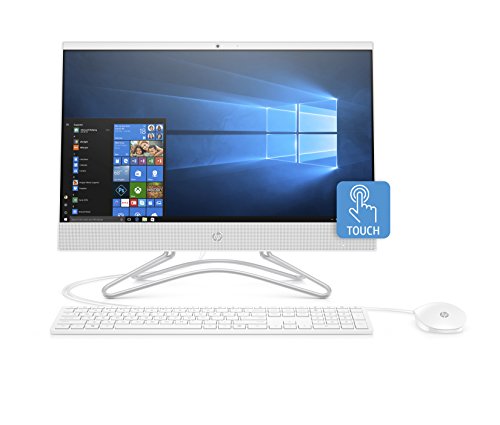 HP 22-c0030 is currently our recommended choice for a desktop for home use.

This is an all in one computer that comes equipped with a fairly decent hardware that is capable of providing a seamless experience.

Why is that? The Core i3 “U” series processors are low powered variants. They have fewer core counts, and lower clock speeds. As such they are cheaper and also run much cooler. They also consume less power.

They are therefore usually installed in compact chassis like laptops and AIO desktops.

Nevertheless, for home use, the Core i3-8130U is still highly capable.

Furthermore, this AIO desktop comes equipped with 4 GB of RAM and 1 TB of HDD. While the RAM is sufficient for less demanding work, you may need to upgrade it if you face difficulties with running powerful software.

While the hard disk on this PC is NOT an SSD, it uses a 7200 RPM variant instead of the normal 5400 RPM. The higher the RPM, the faster is the HDD.

Besides that, it comes with all the useful features like a keyboard, mouse, built in speakers, webcam etc.

The screen in itself is one of the best features of this desktop. It is a 22 inch touchscreen with an edge to edge display. If you want to add elegance to your home, then this will help.

All in all, if you came here looking for a highly recommended option, then this is one of the best desktop computers for home use.

This is the most powerful option in this list and therefore, it is suited for performing not just low key tasks but also casual photo editing / video editing on a regular basis.

Acer Aspire TC-885-UA91 features an Intel Core i3-9100 processor from the latest 9th generation. Unlike the dual core Core i3-8130U, this is a quad core processor with a max clock speed of 4.2 GHz per core.

In fact this processor is even more powerful than the Core i5-8125U processor.

Therefore, as far as the processor goes, we cannot recommend a more powerful option than this.

Besides that, it offers an ample 8 GB of DDR 4 RAM as well as 512 GB of SSD. As mentioned earlier, whenever given a choice, go for SSD over HDD since the performance difference is phenomenal.

This is a standalone desktop that comes with a keyboard, mouse and built-in WiFi.

However, since this is not an all in one PC, it does not include a monitor, speakers or a webcam.

In the end, if you need an option that is powerful, budget friendly, as well as future proof, then this is one of the best desktop computers for home use. 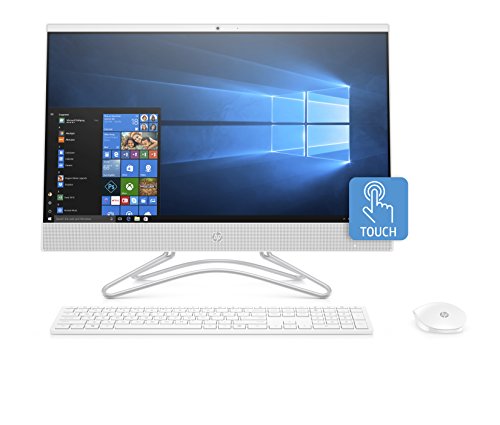 This is a fairly powerful AIO system in this list.

The system here features an AMD processor i.e the A9-9425. In terms of performance, it is comparable to the Intel Celeron J4005. As such, it is excellent for seamless home use.

Along with a fairly decent processor, it also features an excellent screen as well as large 8 GBs of RAM. This amount of RAM is sufficient for the most strenuous of multitasking work that you can perform at home.

In fact, you can even load up tougher software should you wish to learn new skills.

HP 24-f0040 offers a beautiful 24 inch Full HD IPS screen. It has almost no bezels on two sides. On the bottom it includes a nice set of speakers and on the top bezel you have the webcam.

To top this all, it is also a touch screen. Although you won’t be using the tough functionality much, it is still nice to have that added layer of navigation.

Furthermore, it features a high performance 1 TB of HDD that operates at 7200 RPM instead of mere 5400 RPM on conventional HDD. Basically, the faster the HDD, the faster would its response time. So the system will boot faster, files will load faster and apps will install faster etc.

Plus, the overall system looks elegant and beautiful. Even the included HP keyboard and mouse are great looking and comfortable pieces.

All in all, the overall hardware configuration is excellent for intermediate home use as such we recommend this as among the best desktop computers for home use. 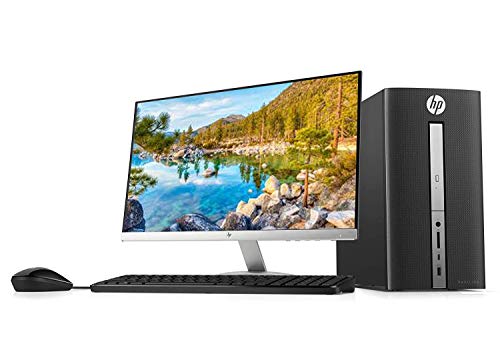 This HP Pavilion bundle is an affordable option for those who need a rather powerful desktop for home use with a large 24 inch comfortable screen.

A large 24 inch screen is excellent for productivity, multitasking as well as for multimedia entertainment. The HP monitor included with this bundle offers an FHD IPS screen.

For those of you who are not aware of the panel technologies, IPS are generally much superior in color reproduction as compared to TN and VA panel. They also offer widest viewing angles. Finally, this panel allows for slim, bezel less monitors with an edge to edge look.

Therefore, as far as the display goes, this bundle gives you an excellent deal.

As far as the hardware configuration goes, this is second only to the Acer Aspire TC-885-UA91 mentioned above. It features an Intel Core i3-8100 which is only slightly less powerful than the Intel Core i3-9100.

Furthermore, it features a large 1 TB of HDD that operates at 7200 RPM instead of the slow and conventional 5400 RPM.

The RAM configuration on this desktop is a bit interesting, While it features a normal 4 GB of RAM, it also includes 16 GB of Intel Optane RAM.

While the Intel Optane RAM is not a replacement for original DDR4 RAMs, it can still significantly boost the performance.

Finally, it features all the other goodies like a DVD drive, mouse, keyboard, WiFi etc.

Unfortunately, it misses out on built in speakers as well as a webcam – that is something the AIO still have an edge over standalone desktops.

In short, if you want a monitor plus CPU bundle, then this is one of the best desktop computers for home use.

Before you begin looking at this monitor, know that is an “Amazon Renewed” product.

So what is an amazon renewed product? Basically, these are previously owned products that have refurbished by tested supplies and made to become brand new. They also come with 3 months of the Amazon Money Back Guarantee.

The benefit for you here is an unprecedented value. You get an awesome hardware for even half the price of the original product with nothing out of the place.

With that said, this Dell Inspiron 3275 offers an excellent hardware configuration for its price. It features an AMD A9-9425 processor. As mentioned earlier in our review of the HP 24-f0040 above, this is highly capable processor home use. It is comparable to the Intel Celeron J4001 in terms of performance.

In addition to that, it offers an ample 8 GB of RAM and 1 TB of HDD. The screen is 22 inch FHD featuring an IPS panel for higher color fidelity.

The 8 GB RAM is also a great addition and will definitely come in handy when multitasking.

Additionally, it features all the usual features you would expect from an AIO desktop like a webcam, built in speakers, WiFi, keyboard and mouse etc.

Just a note, you can’t see the webcam because it is a pop up component. This is actually excellent for security purposes since it only comes up when needed. Otherwise, stays hidden.

In short, if you are looking for you are okay with a refurbished machine that comes with a 90 days Amazon Guarantee, then this is one of the best desktop computers for home use. Refurbished laptops are pre-owned, they offer unprecedented value.

In this article we had a look at the some of the best desktop computers for home use currently on the market.

The key point to note here is that the desktops for typical home use are generally entry level, affordable desktops suited for low key tasks.

If you buy these desktops and then expect them to run games, Photoshop, 3D studio etc then you will absolutely be disappointed.

Both the AIO as well as the standalone desktops mentioned here are only suitable for casual home use, school work, streaming etc