The simple answer to the question: “How Fast a Processor Do I Need?” is that it depends on your use.

I am sure this is a very vague answer, but seriously, there is no simple one line answer to this questions.

While I will elaborate on the answer below, if you have specific scenario in mind, feel free to comment below. I will help you out with picking the right processor.

The speed of a computer processor does matter a lot depending on your use.

You may need an adequate processor to serve you in gaming, programming and day to day office work among other purposes. Yet each of these purposes have a different definition of a “fast processor”.

What is a Processor?

If you did not know this already, here is a brief look into the definition of a processor:

The processor simply serves as the brain of the entire computer system and the faster it is, then instructions will be executed faster.

Such instructions that processors may execute may include saving word document, copying a file, calculating the next frame of your video to display etc.

Similarly, when a computer gamer presses a keypad, the CPU undergoes countless cycles to processes the gamer’s request and execute a various instructions that is recognized by the game software.

The speed of the processors can depend on the following parameters:

Consider the processor speed as the equivalent to Human IQ. A scientists researching on cutting edge new technologies needs a fairly high IQ. On the other hand, someone who just types articles (like me) doesn’t need a very high IQ.

With that said, let us elaborate on this idea:

How Fast A Processor Do I Need? – 4 Preliminary Things to Consider

1. What is the Nature of Your Work?

You have to ask what you will be using the processor for.

Are you going to be performing heavy duty tasks like gaming or are you just going to use the processor for trivial work like word processing, researching or internet surfing?

Generally for basic use, you can look into processors ranging from Intel Celeron to Intel Pentium (or AMD equivalent).

These processors can have a varying amount of Cores as well as speeds.

For moderate levels of gaming as well as work like casual editing and designing you can look into Intel Core i3 or Intel Core i5 (Ryzen 3 and Ryzen 5 in AMD’s case).

For professional levels of work you can look into Core i7 or Ryzen 7 series.

Lastly for workstation grade high levels of work, you can look into Intel Core Extreme or Xeon processors.

This question is equally as important as the question “How Fast A Processor Do I Need?”.

If you want to game but you only have the budget for an Intel Celeron processor, then the question “How Fast A Processor Do I Need?” becomes irrelevant.

With that said, if you are tight on budget and you are looking for a great processor for normal use, then try to at least go for Intel Pentium processors. Anything lower i.e Intel Celeron or Intel Atom can cause frustration.

Read: Laptops for Photo Editing under $500

3. Can the Nature of Your Work Change in the Next 3-5 Years?

You have to consider this angle as well.

If currently your need is only for a Intel Pentium processor but if you foresee the nature of your work changing with time, you need a future proof processor.

For example, if Intel Pentium N5000 can serve you well today, it may not perform too well 3-5 years from now.

Perhaps you will have acquired a new Photoshop editing skill. In that case, Intel Pentium would not suffice.

When considering this question, your answer to the question How fast a processor do I need would change.

4. Are you Getting a Desktop or a Laptop?

The processors for laptops are considered weaker compared to the one on desktops when comparing the same series.

On top of that, the Intel Celeron N4100 has more than double the “Recommended Customer Price” by Intel.

How Fast A Processor Do I Need? – 4 Processor Specs to Consider

Here are some of the things you can consider to determine whether a certain processor is a good fit for you.

When someone asks about How Fast A Processor Do I Need? They generally mean it in terms of Clock Speed.

HOWEVER, a faster clock speed DOES NOT ALWAYS equal a better performance!

We can measure the internal clock speed of a CPU in GHz. GHz refers to the number of instructions that a processor can execute every time a clock ticks.

Unfortunately, the speed of the processor ALONE can be misleading.

However, despite the fact that Intel Atom x7-Z8750 has a higher clock speed as compared to the Intel Celeron N4100, the Celeron N4100 is a much more powerful processor.

Therefore, while clock speed is still a good yard stick to measure a given processor, it can be misleading.

To make your life easier, take the overall series into consideration before looking at the clock speed. The clock speed is a great way to compare processor only WITHIN a certain series i.e Atom. Celeron, Pentium, Core i3 etc

2. The Number of Processor Cores

When choosing the computer based on cores, you should probably know whether you will be running multiple applications concurrently.

Cores are basically a way to scale the performance of a processor. You can have a single core with an extremely high clock speed. Or you can distribute that power among cores.

The drawback of having a single powerful core is that not only does it run extremely hot and consumes a lot of power, it is also not too great for multitasking.

The number of cores is a good measurement of how powerful a certain processor is WITHIN a series.

Like the clock speed, higher number of cores DOES NOT mean a better performance.

Read about it more here: Do More Cores Mean a Better Performance?

Think of cores as MORE brains. Similar to the human brain, if a human have more than one brain, it could mean that they can perform more tasks simultaneously with ease.

This is yet another important consideration.

Along with cores, you need to understand the concept of threads.

The total amount of threads you have is also called logical cores.

Read about the Difference between physical cores and logical cores. 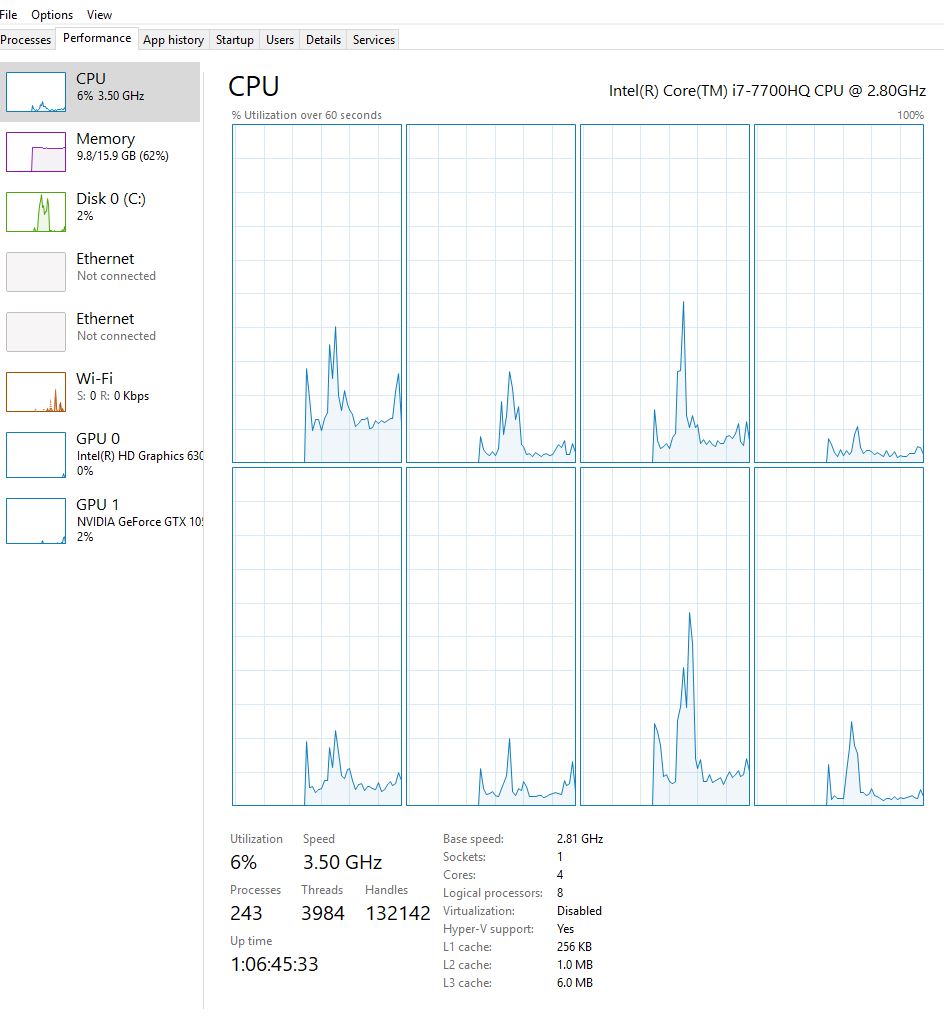 Normally each core has a single thread. This technology essentially adds another thread per core.

Think of threads as conveyor belts that send instructions and data to the cores to process them.

Conventional cores have a single conveyor belt (thread). With Hyper-Threading/HyperThransport each core essentially gets another conveyor built to supply it with instructions.

Basically, it is a way of improving the efficiency of a single core.

Hyperthreading/HyperTransport can do wonders for environments that support multiple threads like editing, rendering, designing etc.

Since both clock speed and the number of cores are NOT the definitive determinant of faster speeds then what is?

You can consider the amount of cache in a processor as a good yardstick for grading a processor’s performance.

A better and a higher-end processor will ALMOST ALWAYS have a higher Cache memory. 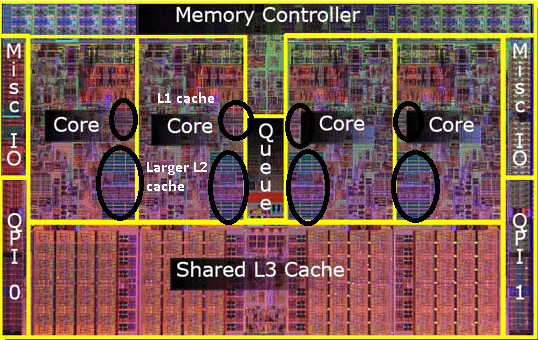 Cache memory has levels i.e L1, L2, L3 and even L4 nowadays. These work like RAM except they are the fastest type of memory that a processor can access.

L1 is the fastest, L2 is the second fastest and so on.

Instead of transferring data to and from the RAM, the manufacturers have designed CPU to contain these cache memories.

The cache is designed to reduce the time and power that a processor uses whenever it accesses Random Access Memory.

Also read, does each core have its own L1 and L2 Cache